The dark turn of the immigration fight…

In light of the current immigration raids, I thought of a conversation I had with a good friend of mine. When he was a child, his parents smuggled him into the United States in a trunk of car. Growing up, he and I did the same things as any other young man – went to school, played video games, read comic books, and talked about girls. It wasn’t until the Immigration Customs and Enforcement raids started to happen around our city that he told me how he arrived here.

Listening to my friend who I had known for years, expressing his fear being stopped and detained while driving down the street, going to the store, or coming to work was unimaginable. His story of essentially having to be on the lookout at all times was jarring. I hung on to every word as he told me the danger of being undocumented. At the time, he could not apply for student loans to go to college because of the status of his citizenship. The paranoia of being deported and locked out of many things we in this country take for granted was surreal.

He eventually became a citizen and was able to live a life of not having to look over his shoulder, but how many still have to? In discussing Trump’s latest moves, friend and activist Al Osorio said, “Trump is doing exactly what he told everyone he was going to do, so why are people surprised?” True, but it’s unnerving seeing so many in a position of total vulnerability.

In this current climate of America, white supremacy is the ruling thought. President Donald Trump has installed a cabinet of overt racists and narrow minded thinkers that cannot and will not step outside of themselves and see another point of view. In the news and online, there have been many reports of immigration roundups. Trump has openly flirted with the idea of deploying over 100,000 National Guard troops to capture undocumented citizens in the US. What was once thought of as a fanatical idea of “deporting all the illegals”, now doesn’t seem so crazy.

When I listen to people argue, “Well, can’t they come here legally? My parents did…”Or the popular refrain, “They need to go back to their country”,  I shake my head in sadness and disgust. There is a cognitive dissonance we have when talking about non-white people immigrating into this country. It is okay for the resourceful Irish immigrant leaving his homeland due to the “famine” or the Italian family coming to America to search for a new life. Those stories are celebrated, cherished, and told through generations. But a young Mexican man trying to provide for his wife and child or a Salvadorian woman looking to escape her gang infested land who may not enter America through conventional means is looked at as criminal and “sucking off the tit of the system.” It is all bullshit. There is no love for the “young, scrappy, and hungry” person if he or she is not white. As a friend told me, “Not everyone comes through Ellis Island.”

Reading this, some people may say, “Why do you care? You are a citizen. You are Black, why do you care about ‘illegals’?” Or, “Latinos and Asians don’t even like Black folks.” I care because it is the right thing to do. Can you imagine being in danger of losing everything you have ever known? No one deserves to live like that. To be paranoid every time you come out of your home. Wondering if the person knocking at your door could be INS, ICE, the police, or some other government agency. Living your life in perpetual fear thinking, “This could be the day.” I would not want that for anyone. That is not living. As far as the racism coming from Latino and Asian communities, I acknowledge that and agree anti-Blackness needs to be addressed, but fuck all that right now. What about the young kids in school who didn’t have a choice in the matter when coming to the United States? We are just going to disregard them? Finally, about my “citizenship” in the United States? Ha! Until Black people are treated equally as white people in all areas of life, that “citizenship” rings hollow.

In 2017, President Trump has targeted the undocumented citizen with a fervor that I have not seen in quite some time. As we say in the hood, “Shit is about to get thick.” I highly advise everyone to become informed on the laws and rights we have. If you hear about a possible ICE raid or check point, and can verify it, please share it on social media and tell a friend to tell a friend. I am not saying that we are at the point of hiding people in our basement ala Anne Frank, but this is just February, two months into Trump’s administration and anything can happen. I may have a studio apartment, but I got room. 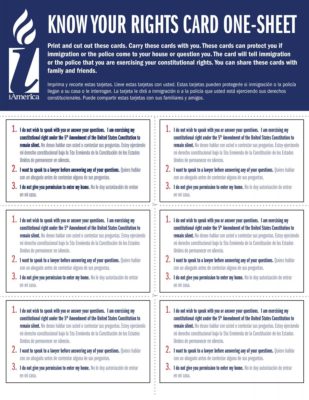 1 thought on “The dark turn of the immigration fight…”